We have come across a bit of confusion when ordering beers in pubs.  Our Victorianness first became apparent in South Australia when we were ordering beers during our Mount Gambier pub crawl.

“I’ll have a pint of West End thanks!”

The bar wench will start to pour the beer into a 450ml glass.

We felt like we were getting jibbed getting 450ml of beer instead of 570ml like we would in Victoria.  The confusion continued as we travelled through South Australia to Western Australia and found out that pots were called middies.  It was like we were speaking a different language!

We took it upon ourselves to find out all the different names for beer sizes so that when we cross the border into the Northern Territory and beyond, we wouldn’t make it obvious that we weren’t local.

The most popular beer sizes in Australia include…

The smaller varieties like the 200ml (7 oz) and 140ml (5 oz) servings are less common.  We’ve seen them on the road when we buy a tasting paddle at a brewery and that’s about it.  The number of standard drinks for each beer size depends on the strength of the beer.

Here is a quick rundown by state of what beer sizes are called. Let’s not forget that there is a special glass for the type of beer that you’re drinking.  Don’t ask questions, just smile and nod your head. 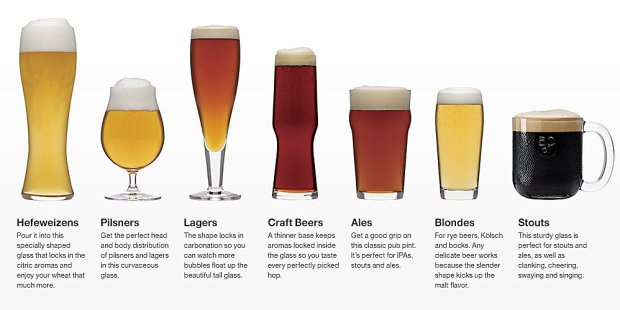 So there you have it – no excuses now!  If we’ve forgotten any sizes or if you’ve heard any other names for beer sizes around Australia, we’d love to hear it.  Chuck us a message via facebook or twitter!